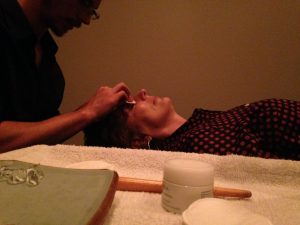 By, Leighanne Lockhart/ The Studio

In November, The Studio officially launched its new Relaxation Lounge which took the place of the former spa area which held the traditional, private facial and massage rooms. Now, the team has expanded the space, expanded what they have to offer their guests, and expanded their horizons.

With a few new and simple services, the room has allowed the opportunity for more guests to be able to afford and make time for a relaxing spa service before, during, or after their regular hair and nail appointments.

One of those services The Studio now offers is a twenty-minute foot reflexology massage guests are loving. 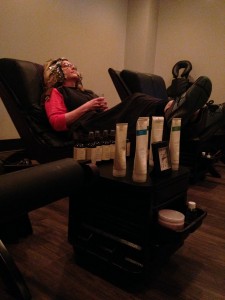 But, what exactly is reflexology?

According to Google, reflexology is “a system of massage used to relieve tension and treat illness, based on the theory that there are reflex points on the feet, hands, and head linked to every part of the body.”

“I usually just explain to the guests that the service is a pressure point massage that focuses on the feet,” massage therapist Brian Clifton says.

The service, which is called ‘Restore Your Soles,’ a warm foot soak with bath salts, an exfoliating scrub, hot towel rub, and fifteen minutes of reflexology finishing off with a foot lotion.

Brian explains the reflexology massage begins at the top of the foot and works its way down to the heel, hitting the pressure points to activate the corresponding organs for multiple benefits. Hot stones and a massage stick may also be used.

“Guests have described the experience as relaxing, wonderful, amazing,” he says. “One even said it helped her to walk better at work.”

Reflexology may reduce pain and psychological symptoms such as anxiety and depression and enhance relaxation and sleep, according to studies funded by the National Cancer Institute and National Institutes of Health as stated on MayoClinic.com.

Schedule any of our Relaxation Lounge treatments alongside your next hair or nail appointment, or simply stop in between running errands to sneak in a 20-minute pampering sesh. You won’t regret a minute of it.